Count yourself lucky if you’ve never had urinary tract infection or UTI in your life. On the pain scale, I’d personally give it a 6 or 7, but on the annoyance scale, I’d definitely give it a 10! Going to the bathroom every 10 minutes to pee only a few drops each time is the most annoying thing ever. Now, antibiotics can get rid of a UTI fairly quickly, but it’s got a number of downsides, too. Today, you’ll learn why live cultures for UTI is a much better, more natural treatment option.

For those that haven’t had UTI before (or weren’t aware you had it), here’s a primer to get you up to speed. Basically, UTI’s are bacterial infections that can occur at any point of the urinary tract – from the urethra, bladder, ureter, and all the way up to the kidneys.

Infections at any of these urinary system components go by different names:

These different infections become more serious as bacteria goes from the urethra to the kidney. It’s very important to treat it right away to prevent it from progressing. Currently, antibiotics are commonly used to treat these infections. But later on, you’ll learn why live cultures for UTI are a much better alternative.

Now that you know what UTI’s are, here’s a not-so-fun fact (especially if you’re a woman):

With the way the female anatomy is designed, women literally get the short end of the stick. What I mean by that is, the female urethra is shorter than male ones, so women are naturally more prone to UTI’s than guys.

That being said, over 50% of women get a UTI in their lifetime, and for 25% of them, the infection reoccurs and significantly impacts their quality of life (1, 2). Of course, UTI’s can also affect men (even with their longer urethras), but the infection rate is 50 times less common than in women.

Whether or not you belong to the fairer sex, it’s important to know what to look for to find out if you have an infection. The last thing you want is for a relatively mild urethritis or cystitis to escalate to a potentially life-threatening infection – all because you ignored these common UTI symptoms below!

These symptoms are unpleasant, but they are not considered serious. However, if the infection does spread to the kidneys (pyelonephritis), it can potentially cause kidney damage or even death. So, get yourself checked out if you do experience these symptoms.

Have you heard of the phenomenon known as ‘honeymoon cystitis’? This frequently occurs amongst new brides right after they come back from their honeymoons. And you know what’s the most common culprit?

No, it’s not their grooms (not technically anyways) … but the bacteria called Escherichia coli (or E. coli for short). Yes, it’s that bacteria that infamously lives in our colon (that’s our backsides).

E. coli lives naturally in our gastrointestinal (GI) tract, a.k.a. the gut, although only in small numbers (2). However, when the growth levels of E. coli increase beyond what’s normal, and they get off balance with the good bacteria, it can start to cause problems for us (8).

Here’s a graphic illustrating how E. coli can cause UTI’s:

E. coli have special finger-like projections called fimbriae, which are sticky and made of a glycoprotein called lectin. Lectin allows the fimbriae to stick to the cell walls of our urinary tract (9). The ends of the fimbriae have sticky proteins called adhesins that stick to receptors on the cells lining the urinary tract.

Although the urinary system is designed to keep out such microscopic invaders, these defenses sometimes fail. If enough E. coli gets into the urinary tracts and stick to the cells, they can multiply and colonize there, which causes an infection.

The standard treatment for a UTI is a course of antibiotics, and it’s been this way for many years. Antibiotics can still effectively treat uncomplicated UTI’s, but here’s the alarming truth:

The main issue here is that antibiotics don’t just kill UTI-causing bacteria like E. coli, it also kills off beneficial bacteria in our gut. Then, as the bacterial populations regrow after a course of antibiotics is over, it can cause ‘dysbiosis’.

Dysbiosis is an overgrowth of potentially pathogenic bacteria, fungi, and other microbes. This can directly lead to fungal infections like thrush (both oral and vaginal), candida overgrowth, and other GI infections, most notably Clostridium difficile (11).

However, dysbiosis has also been linked with many other health conditions. These include skin problems, mental health issues like anxiety and depression, immune conditions, and obesity (12).

With such a long list of possible side effects, would you still be willing to use antibiotics to treat a urinary infection? I wouldn’t blame you if say no. So, let’s find out in the next section if live cultures for UTI is indeed the best natural alternative to antibiotics!

How to treat UTI’s without antibiotics?

So, because of the problems with antibiotic treatment and the increase of antibiotic-resistant strains of bacteria, this form of treatment is becoming less and less effective. Going forward, UTI prevention is a significant treatment goal, especially for people who suffer from recurrent infections (13).

Now, there are 3 major areas we can focus on to help prevent – and treat – UTI’s.

1st Step: Take care of your hygiene to prevent UTI’s

As the saying goes, prevention is better than cure. Follow these basic hygiene rules to stop bacteria from the colon or vagina from reaching the urethra.

Live cultures (a.k.a. good bacteria) help keep the gut healthy. It restores normal gut bacterial balance, and ensures E. coli and other pathogenic bacteria are under control. But where exactly can you find live cultures?

Well, fermented foods naturally contain live cultures. A few examples are yogurt, pickles, miso, sauerkraut, kimchi, some kinds of cheese, and sourdough bread. These are all delicious foods, but when it comes to UTI prevention, there’s a better option – live culture capsules!

Studies show that live culture capsules taken orally can change not just the bacterial balance in the gut, but also in the vagina. This is obviously great news for all the women out there!

Now, the thing is there is a close correlation between a change in the normal microbiota (i.e. bacterial balance) in the vagina and an increased likelihood of developing a UTI (14). And since the vagina’s microbiome is predominantly made up of Lactobacillus strains, it’s therefore not all that surprising that Lactobacillus live culture capsules (taken orally) can replenish the vaginal microbiome (15, 16).

Here are some notable findings:

Another study tested live culture supplements against antibiotics for a year in a group of women who suffered from recurrent UTI’s. They found that in women who were given antibiotics for a year, the average number of UTIs went down from 7 to 2.9. For women given live cultures, the average number went down from 6.8 to 3.3 (18).

The difference may not look all that significant, but here’s the thing:

In women with ‘complicated UTI’s’* the live cultures group did better, experiencing only 3.4 recurrences as opposed to 4.4 in women taking antibiotics.

*Complicated UTIs were defined as UTIs in women with functional or structural abnormalities of the urinary tract, metabolic and/or hormonal abnormalities, or impaired host responses.

So we’ve already seen that supplementing with live cultures for UTI is virtually as effective as antibiotics for preventing infections. And live cultures can reduce them by over 50% with none of the dangerous side effects of antibiotics.

With proper hygiene practices, we can reduce this even more, but what if we took it to another level? We can do this by also supplementing with cranberry juice and D-mannose.

Cranberry juice has long been used as a home remedy to treat UTI’s. It was initially believed that cranberries somehow made the urine more acidic, which made it difficult for infectious bacteria to grow there (19).

However, we now understand that cranberry juice works because it contains 2 compounds that stop the E. coli bacteria from being able to stick to the cells lining the urinary tract (known as uroepithelial cells) (20).

These are the 2 compounds found in cranberry juice:

Here’s an illustration on the mechanism of D-mannose against UTI-causing bacteria: 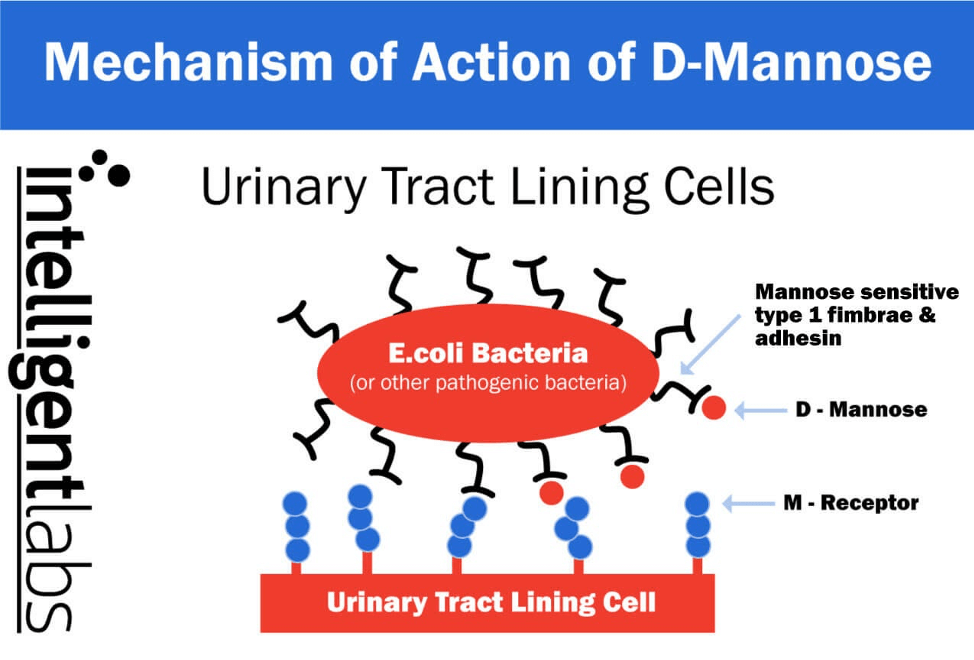 As seen in the first image above, there are finger-like projections that come from the E. coli bacteria called fimbriae that the E. coli use to stick onto the cells on the walls of the urinary tract. They use the small sticky adhesins at the end of their fingers to do the ‘sticking.’ These adhesins are either mannose sensitive (type 1) or mannose resistant (P fimbriae).

Although D-mannose is a component of cranberry juice, it is recommended to take it as a separate pure D-mannose powder as this makes it 10-50 times stronger than the D-mannose in cranberry.

Also, although D-mannose is sugar, it is completely safe to take for long term because very little of it is metabolized. It also doesn’t interfere with blood sugar regulation, even for diabetics (21).

There have been several studies showing the effectiveness of either cranberry juice powder or pure D-mannose powder in preventing UTI’s. Here are some of them:

Walker et al (22) found in their experiment that women (who were taking Cranberry Juice powder) had, on average, 2.4 UTIs per year, while those taking a placebo averaged 6 UTI’s a year. 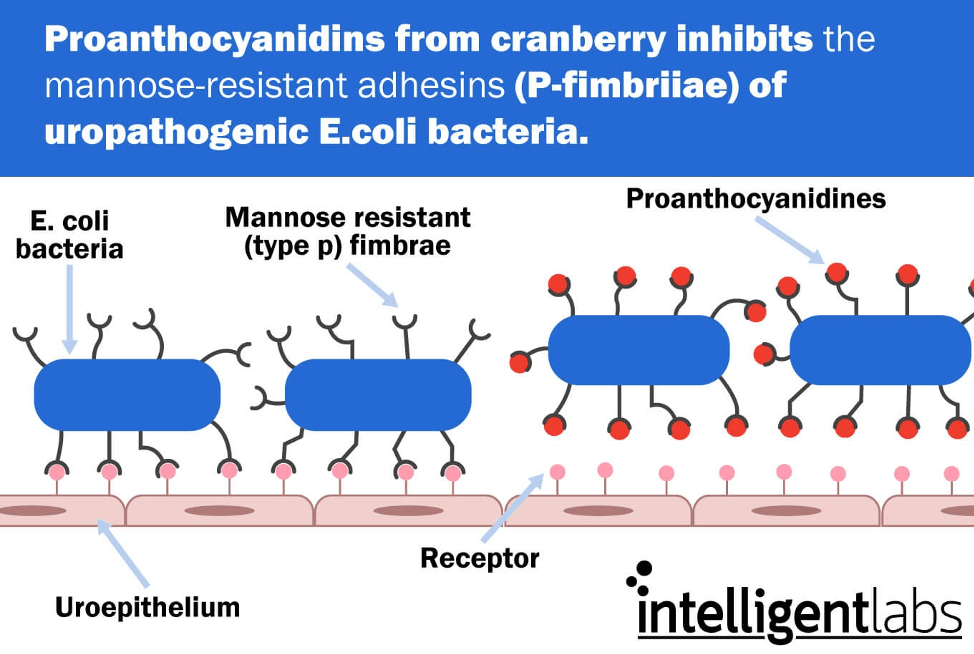 A study conducted on sexually active women between 21 and 72 years of age. 150 women were put into 3 groups: one group drank cranberry juice, another took cranberry capsules, and the third group took a placebo (23). The researchers found the following:

Another study on pure D-mannose powder, conducted on 308 women after they had recovered from acute cystitis, gave them either D-mannose, antibiotics, or a placebo (24). They found the following:

Now, is there such a product that combines ALL THREE UTI-fighting ingredients – live cultures, cranber