What’s the best time to take a live culture? Is it in the morning, or maybe after lunch? This question seems to divide live culture manufacturers more than anything else, with lots of conflicting advice and information. It really shouldn’t be like this though.

To answer the question, we need to understand what situation will allow the maximum chance of the live culture bacteria reaching where we want is to, the large intestine, alive.

Many companies suggest taking their probiotics in the morning on an empty stomach, but this is really not great advice. After fasting throughout the night, the PH of our stomachs reaches it’s most acidic, ranging from around pH 0.8 to 2. The more acidic your stomach is, the more chance it has of killing the live cultures.

So What Is the Best Time to Take a Live Culture?

Well, the time is not that important. We recommend our customers to take in their live cultures in the morning because it tends to be easier to form a routine and not forget to take them. However, if you prefer to take them at another time of day that’s fine.

What is more important is to take Live Cultures with food and not on an empty stomach. After a meal gastric pH levels will rise to between pH 4 and 7, meaning the stomach is much less acidic, so there’s less chance of the probiotics dying. Also, the digestive enzymes released when we eat will ensure the stomach empties more quickly.

The authors of the study went on to say that it was the fat content of the meal that was important for the survival of the live cultures. So, try to have a little fat in your meal that you take your live cultures with (1).

But What About Enteric Coated and Delayed-Release Capsules?

All reputable probiotic companies should use an enteric-coated or delayed-release capsules, and these capsules should ensure that the live cultures make it through the stomach acid alive. At Intelligent Lab, we use a delayed-release capsule. However, no company can ensure that these will work perfectly every time. So because we want to guarantee that the minimum of 50 billion CFU that’s in each of our capsules reaches your gut alive, we suggest taking them with food.

There’s another thing, that’s more important than looking for delayed-release or enteric-coated capsules. Make sure that whichever live culture you are using lists the sub-strains of bacteria that are in its live culture. Just listing a strain should be a big warning sign as to the quality of the live culture.

For the most common probiotic strain – lactobacillus acidophilus, we use the sub-strain La-14*. This is a well-researched sub-strain that we’ve chosen for its unique health benefits and it’s ability to survive stomach and bile acids.

Simply listing a strain on a live culture in the bottle such as lactobacillus acidophilus with no sub-strain, is a bit like saying I have a dog. OK, so you have a dog, but what type is it? A German Shepard is obviously different from a Miniature Pinscher. Just as those two breeds have different characteristics, so too do different sub-strains of the same bacterial strain. Simply listing the strain with no sub-strain is an indication that a live culture company is using a cheap generic strain to save costs, whose health and survival properties are unknown.

So to conclude, if you’re taking Intelligent Labs Live Cultures, the best time to take a live culture is with a meal to create the best possible situation for the good bacteria to arrive in your gut alive. However, because we use delayed-release capsules and sub-strains specifically selected to survive acidic conditions, if that’s not convenient for you, you can also take them on an empty stomach and they will still work just fine. 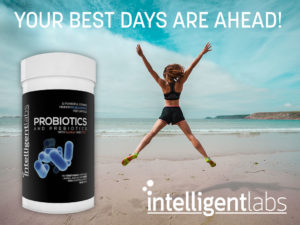 Andy is the CEO of Intelligent Labs, he's also a keen Crossfitter, a pretty good Salsa dancer and a physiology geek!